‘It’s already like this.’ Sexism inspires Brazilian film student to make a change

Thais Cardoso de Moraes’ parents wanted her to become a lawyer or engineer. She wanted to become a filmmaker. She left Brazil to study film in Orlando, where her newfound independence helped her develop the confidence to pursue her dream. She found a lot of support at the UCF Global building, a hub for international students. 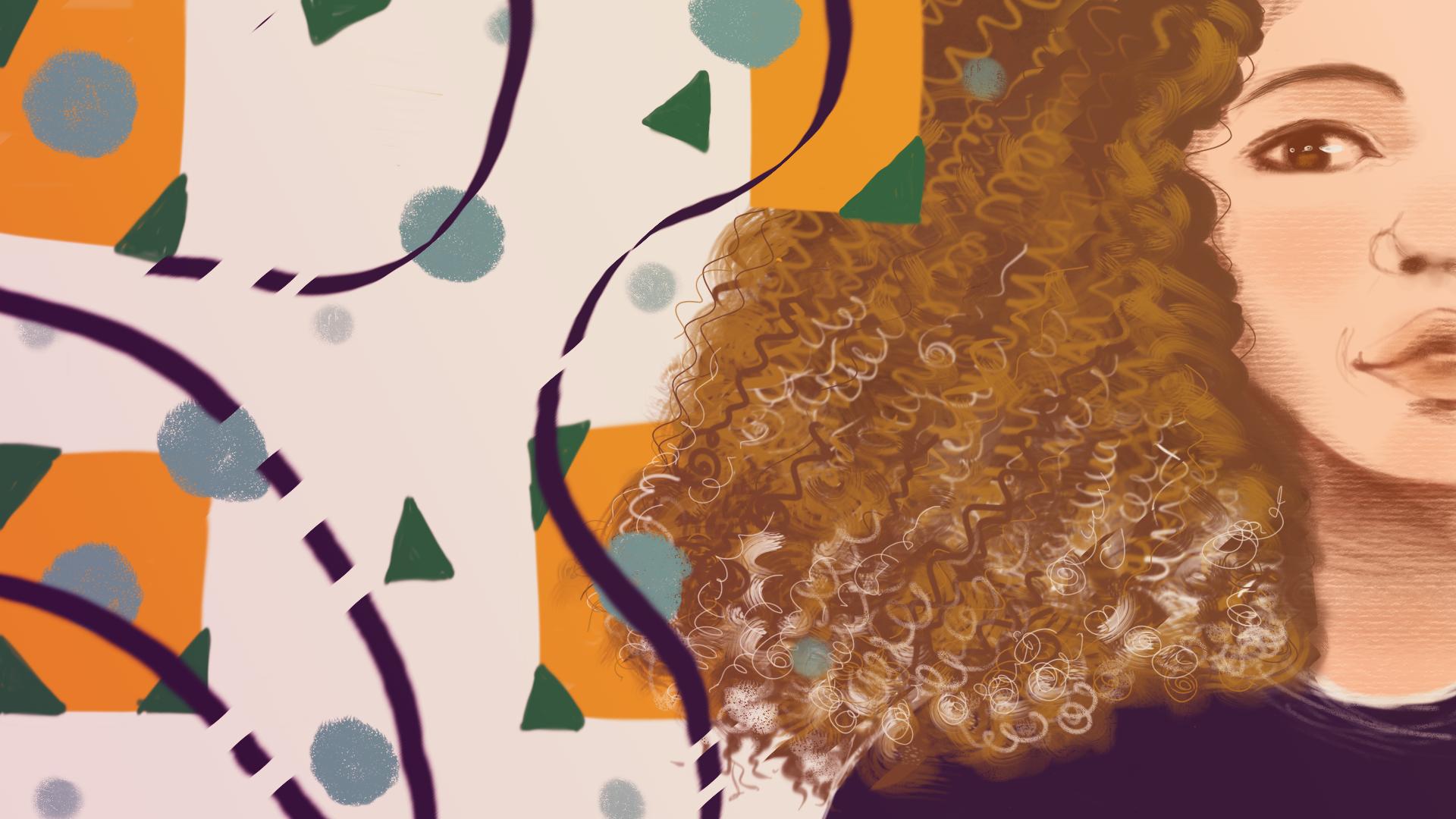 Thaís Cardozo de Moraes was excited when a classmate invited her to work with him on his short film. It would be her first film project as a student at the University of Central Florida.

But she was quickly disappointed when she found out that her only job was to do makeup.

“I thought I was going to help with directing or writing or something, and no,” she said. ”My only job was doing the makeup [for] the girl…I was so angry.”

She said she kept stewing over the experience. “In college it’s already like this,” she said. “Imagine, in the future, how it’s gonna be.”

De Moraes’ first experience as a film student made her realize she didn’t want to be part of someone else’s project. She wants to do her own movies and to hire the people she wants to work on the crew.

This 19-year-old’s love for film started back in her hometown of Barra do Garças, Brazil, with a family tradition: every weekend, her parents would rent and watch four different movies.

“[My parents] didn’t know,” de Moraes said, “but they were kinda making me realize that I loved movies and film,” enough that she wanted to pursue film as a career.

Some of her favorite directors include Quentin Tarantino and Steven Spielberg, but she doesn’t have many female filmmakers she looks up to or whose careers could serve as a model for her own.

Her parents had different expectations for her. She said her parents wanted her to get a job that would guarantee financial security: doctor, lawyer or engineer. They thought that film was just a hobby, not a serious field of study.

De Moraes said she knew that the U.S. would offer more opportunities to become a filmmaker, so she convinced her parents to let her study here. An employee at a college search agency helped find the international student program at UCF.

“He said, ‘Look, I don’t know about Los Angeles or New York, but I know that Orlando has this big university. And in Orlando, it’s the city where everything happens, so you wanna try it?’ and I said, ‘Yeah, for sure!’” In August 2018 de Moraes arrived in the U.S.

She landed at Orlando International Airport at 6 a.m. Representatives of Global UCF, the recruiting arm for international students, were supposed to greet her. But, she said, no one was waiting for her.

De Moraes called UCF to find out how to get to campus. She learned English in Brazil, but she rarely spoke it, so the first time she spoke English to an American was on this phone call. The UCF representative got frustrated with her and had a hard time understanding her accent.

De Moraes decided to just figure it out by herself.

“I was like, ‘Okay.’” She hung up the phone and walked around the airport until she found other international students waiting to be picked up by UCF representatives. She finally got to campus eight hours after she had arrived in Orlando.

As an international student de Moraes has faced financial as well as cultural challenges. Her tuition rate is nearly four times that of a domestic student, and in her first year she had to pay for a meal plan, health insurance and on-campus housing. The conversion rate from Brazilian reais to U.S. dollars doesn’t work in her favor: one real equals 25 U.S. cents.

“All my tuition is on my parents’ hands. So they had to work a lot,” de Moraes said. “My dad is a judge in Brazil. [On paper] he’s capable to pay, but in real life, it’s not so easy. I feel guilt because it’s a lot of money that he’s spending on me.”

She wanted to get a job to relieve the financial burden on her parents, but international students can work only on campus, and only up to 20 hours a week during the semester.

“For it was me hard to find a job because jobs on campus are really competitive, because everyone kinda wants to work here,” she said.

Her advisor helped her get a job at Knightro’s, an on-campus dining hall.

As time has gone by, de Moraes has gained more independence, is more confident in her English, and has started socializing more through her job and classes. She even helped start a book club on campus.

“Now I can talk. The problem is to make me stop talking,” she said, laughing. 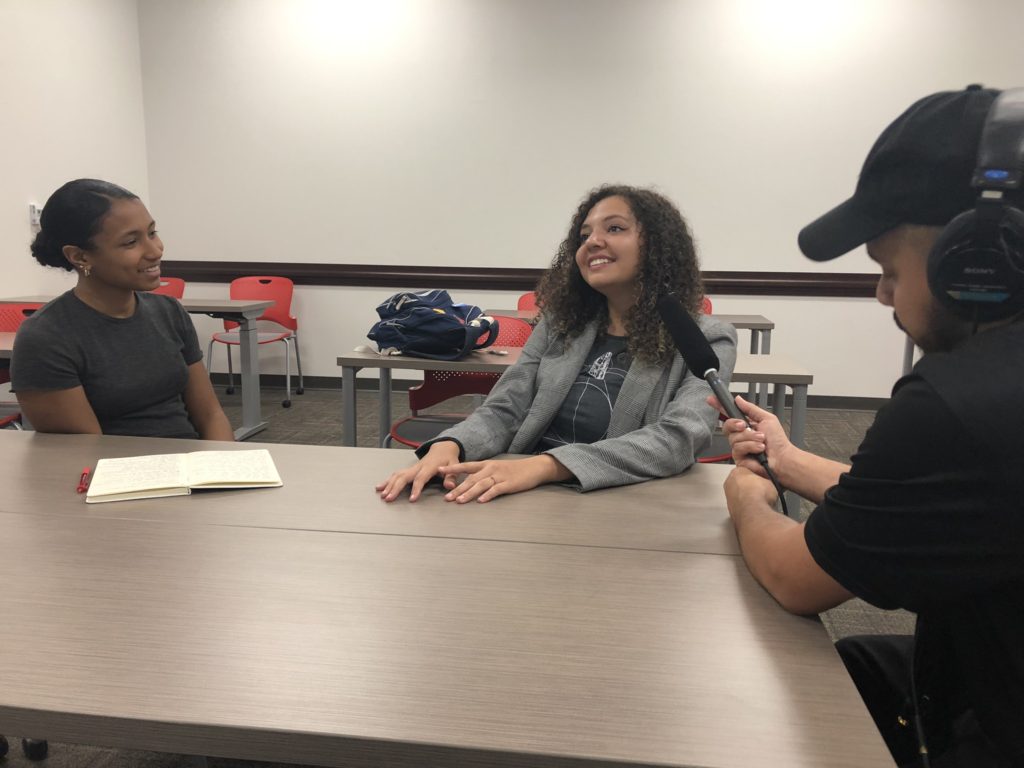 De Moraes wants to use that voice to make her own films and inspire other women to do so. She plans to graduate from UCF, work in the U.S., and eventually go back to Brazil to change the industry.

She said that in Brazil the industry is corrupt and rife with nepotism. A Brazilian affirmative action research group found that between 1970 and 2016, only two percent of films produced in Brazil were made by women. The #MeToo movement has shown her the level of sexism in the industry around the globe.

She said that moving to the U.S. has given her the confidence she needs to work in the film business.

“Before, when I was in Brazil, I was 100 percent sure I could not do anything,” de Moraes said. “But since I came here, I see that there is a way to do original projects, to make your own thing. And if I can do it here, I can do it there in the right way with the right tools.” 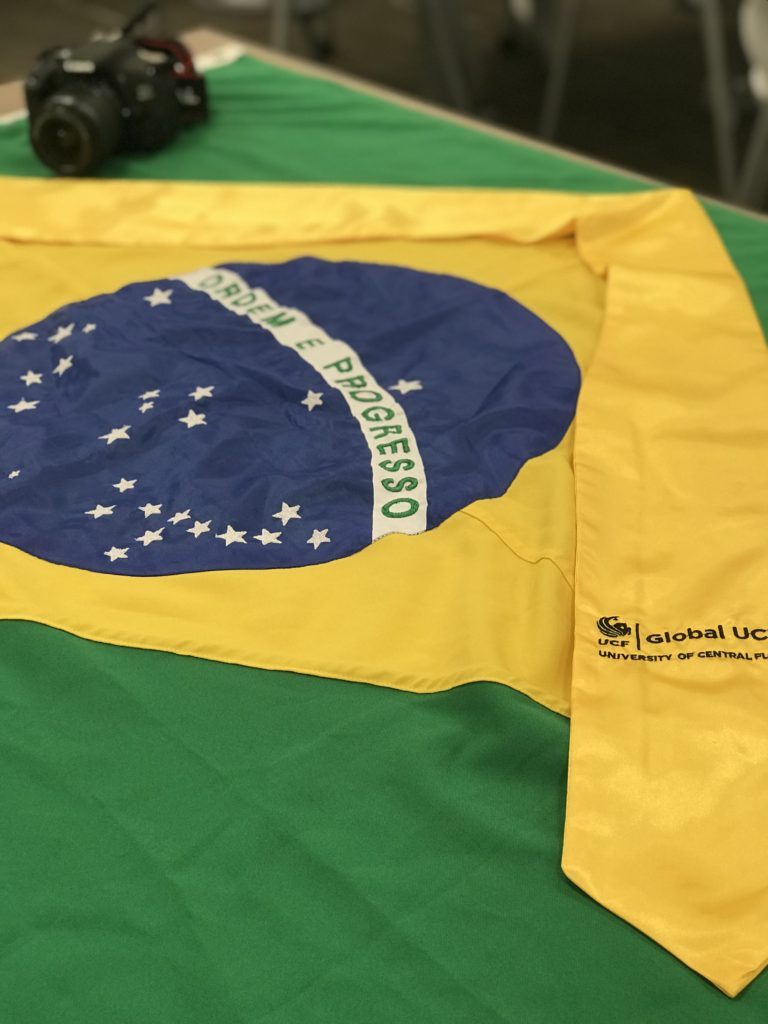 Three items important to Thaís Cardozo de Moraes; a Brazilian flag given to her by her uncle, the camera she uses to film and the sash she was given after her she completed her first year at UCF. (Photo credit: Monica Sealey)

Thaís Cardozo de Moraes shows off a Brazilian flag that she got from her uncle. She’s standing under the pennants representing the four Global UCF “families.” (Video credit: Monica Sealey)