Karen Caudillo is a DACA student at the University of Central Florida and a grassroots organizer. Growing up, her dad worked construction jobs during the week in Naples, Florida, and over the weekend, he was a DJ for quinceañeras and farmworker protests. Karen and her mom continued living in Mexico. On her fifth birthday, she reunited with her dad in the United States. 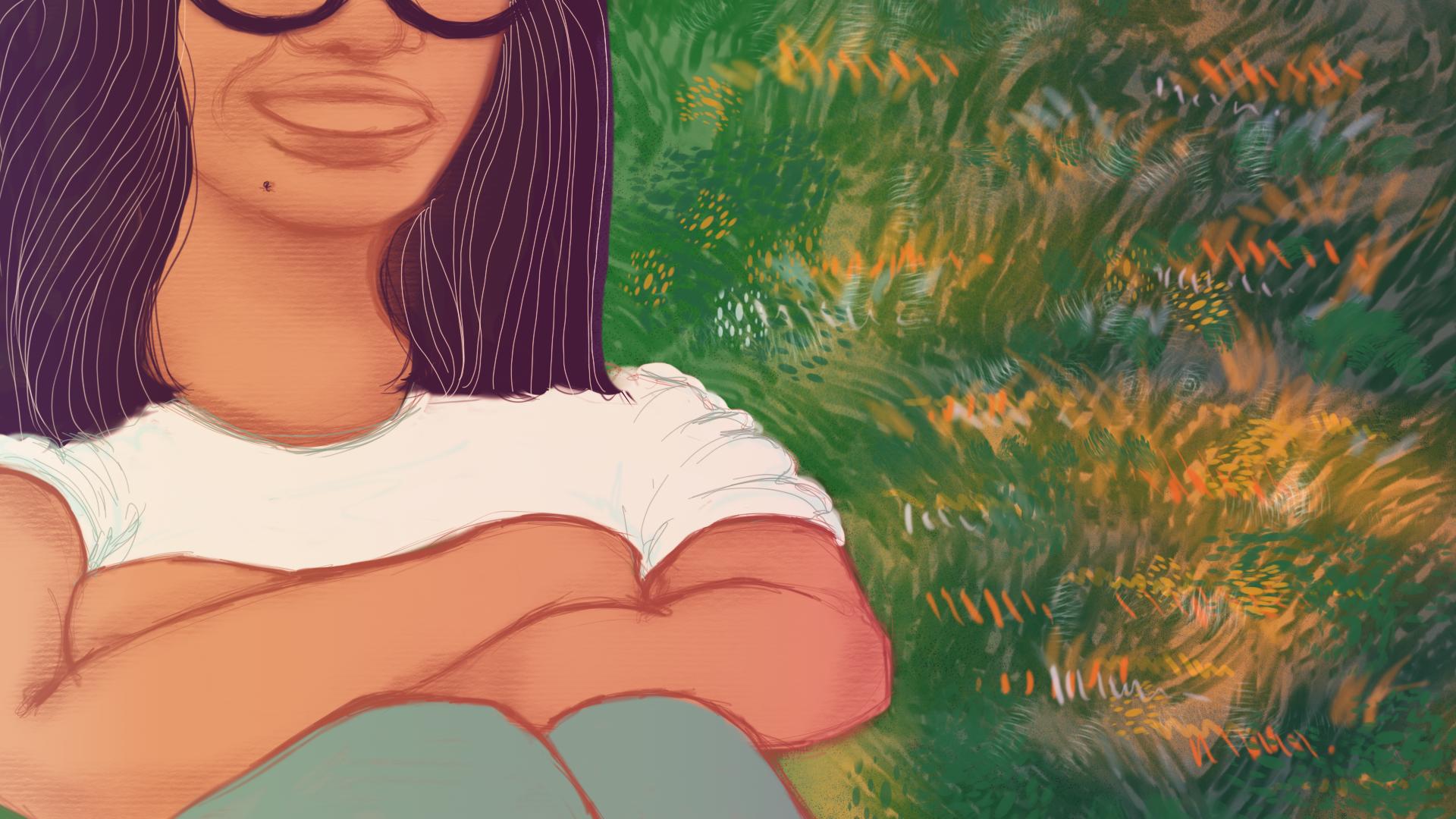 Karen Caudillo’s social media feed could compete with any local news organization’s in Central Florida. On a recent Wednesday, she posted videos on her Instagram Stories that showed her leading protest chants at the Florida capitol building in Tallahassee. She also tweeted three times about a bill moving through the state legislature that increased undocumented immigrants’ risk of deportation.

Caudillo is 23 years old and already has the resume of an established public advocate. She heads a transgender and non-binary inclusive women philosophy organization at the University of Central Florida. She’s also a policy intern for the LGBTQ civil rights group Equality Florida and was a field organizer during the 2018 midterm elections.

A day after finishing her final exams for the spring semester, she boarded a van headed to the capital. Along with the Florida Immigrant Coalition, she led protests against a so-called sanctuary city ban. If signed into law, SB 168 would require local law enforcement to comply with federal requests to detain unauthorized immigrants or face stiff penalties.

Earlier this week, the bill passed through both chambers of the Florida Legislature and is now headed to the governor’s desk.

Caudillo’s activism against SB 168 is deeply rooted in her personal life. Her parents are undocumented immigrants from Mexico City. She grew up in Collier County, the second Florida county to adopt the 287(g) program, which trains deputies to act with the same authority as and on behalf of Immigration and Customs Enforcement agents.

Immigrant advocates have said that SB 168 is the 287(g) program at the state level. According to the Naples Daily News, Collier has had the most active 287(g) program based on deportation numbers.

“It’s taken years of therapy to think about my parents being detained without getting depressed, because that is a possibility,” Caudillo said. “I’ve had a lot of friends who have had their parents deported. Even the thought of me being detained, it’s a very slippery slope.”

At four years old, Caudillo was eligible for the Deferred Action for Childhood Arrivals program after her mother brought her to the U.S. from Mexico.

The Obama administration created DACA for children brought into the U.S. before their 16th birthday by their unauthorized immigrant parents. The Trump administration has been trying to end the program since 2017.

Caudillo’s father learned about a construction boom in Southwest Florida. Before heading to Naples, both her parents had saved enough money for all three of them to cross the U.S.-Mexico border together.

Caudillo remembers her mother saying a smuggler, or coyote, abandoned them before their scheduled trip and left with their payment. According to the Mexican Migration Project, the average cost to cross the border can be nearly $6,000.

Caudillo’s father—who she does not want named out of fear of her parents’ deportation—headed to Mexico City alone in 1998. He saved money working 40 hours a week at a construction job, and he made a little extra money deejaying on the weekends for quinceañeras and community parties.

“My dad’s nickname was ‘Tamal,’ which means ‘the food,’” she said. “It was mostly because he would always ask people like, ‘Hey, did you bring me food?’ And, they’d be like, ‘Yeah, we brought you the tamal.’”

Caudillo and her mom were feeling the strain of her father’s absence by the time the two of them were getting ready to travel across the border in 2000.

“My mom really never hit me, but she hit me once,” Caudillo said. “And I looked at her, and I was like, ‘Why do you want to hurt me?’ And my mom said that me telling her that like changed her life because she realized, ‘Wow, like, I can’t put my anger of being away from my husband and being upset and being depressed and being sad on my daughter.’”

She and her mother crossed into the U.S. hiding in a semi-truck driven by an American couple. Caudillo’s orthopedic wooden shoes clanked against the truck’s side while they crossed into Texas. Her dad and his boss were waiting for them in a dark green Toyota Camry.

On the road to her new home, Caudillo poked her head out the window and saw pine trees.

“I remember coming into Florida, and I was, like, in a car,” she said. “And, I just remember being in the backseat and, like, seeing, you know, these green trees and the highway, which now I know is I-75, and just like thinking like, ‘Wow, this is home.’ Like, I was with my dad.” 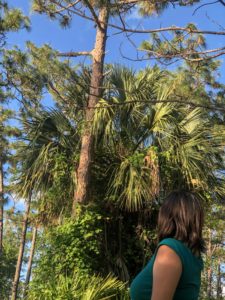 Karen Caudillo looks up at the slash pines behind her, which she says remind her of the trees she saw along the highway on her first drive in Florida after crossing the border with her mother. (Photo by Emily Lang)

Her dad had found a studio apartment that became their home for the next few years. The small quarters included a bathroom and a small two-burner stove. Caudillo said even in that space, in her early beginnings, her parents gave her room to grow.

“Honestly, since I was little, since I got to the U.S., higher education was never a question,” said Caudillo. “My parents always told me like, you’re going to college, they never worried about the how are you going to get there, or who’s going to pay for it or anything, they always just knew — kind of like law of attraction.”

Caudillo was one of the first recipients of the Dream U.S. National Scholarship that funded her college tuition. She is graduating with a degree in political science in December. 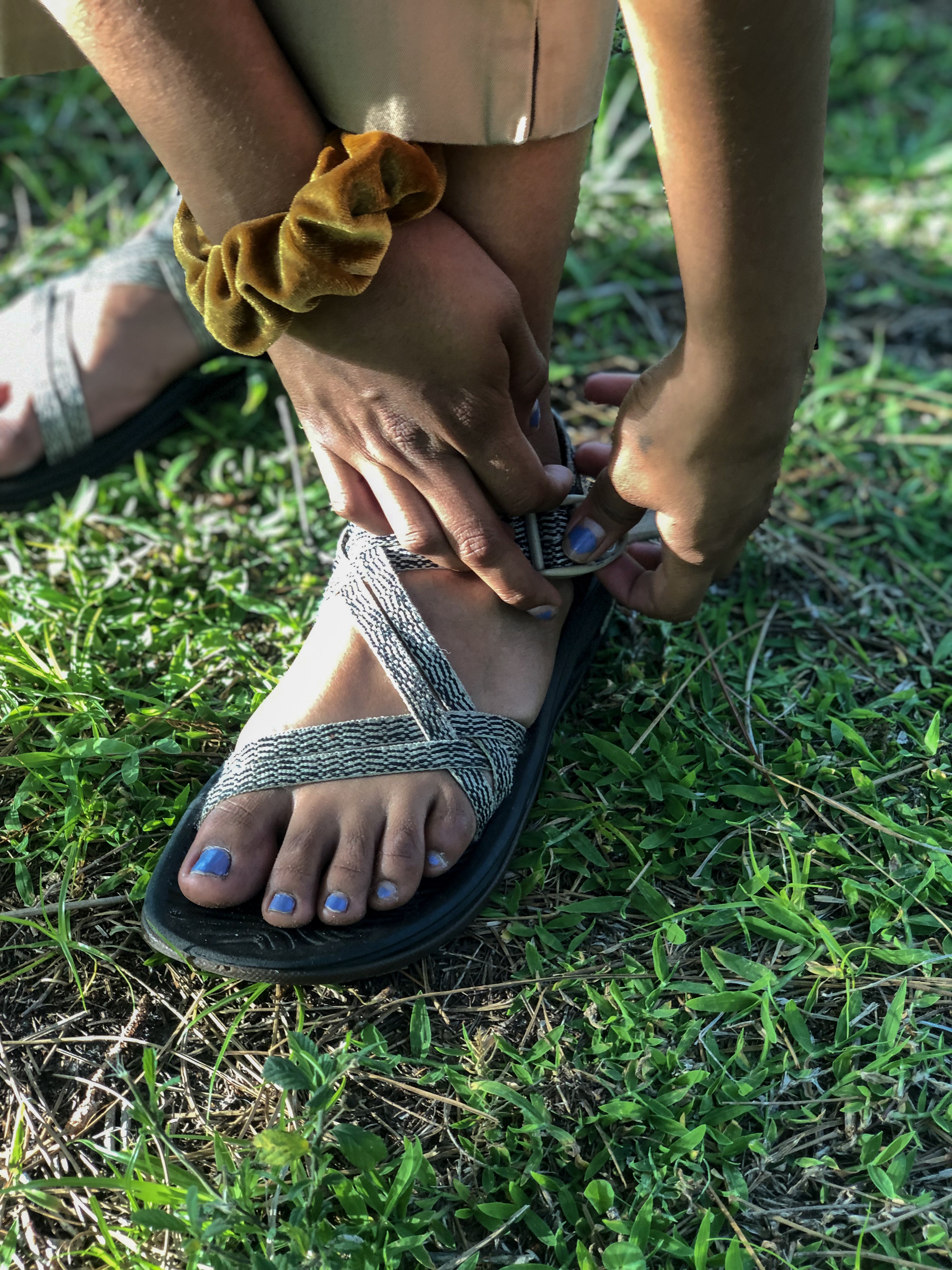 Karen Caudillo tightens the straps on the pair of sandals she wears to the many political rallies and protests she attends — a little different than the pair of orthopedic wooden shoes she wore as she crossed the border as a child. (Photo by Emily Lang)