Argentine immigrant lives the American dream on his own terms

Oscar Lagos came from Argentina to pursue the American dream and establish a business in New York City. But he found prioritizing work over family and health left him with nothing. After a divorce, surviving cancer and several heart surgeries, Lagos changed his philosophy. He now runs an Argentine steakhouse in Orlando focusing on quality of life over quantity of money. 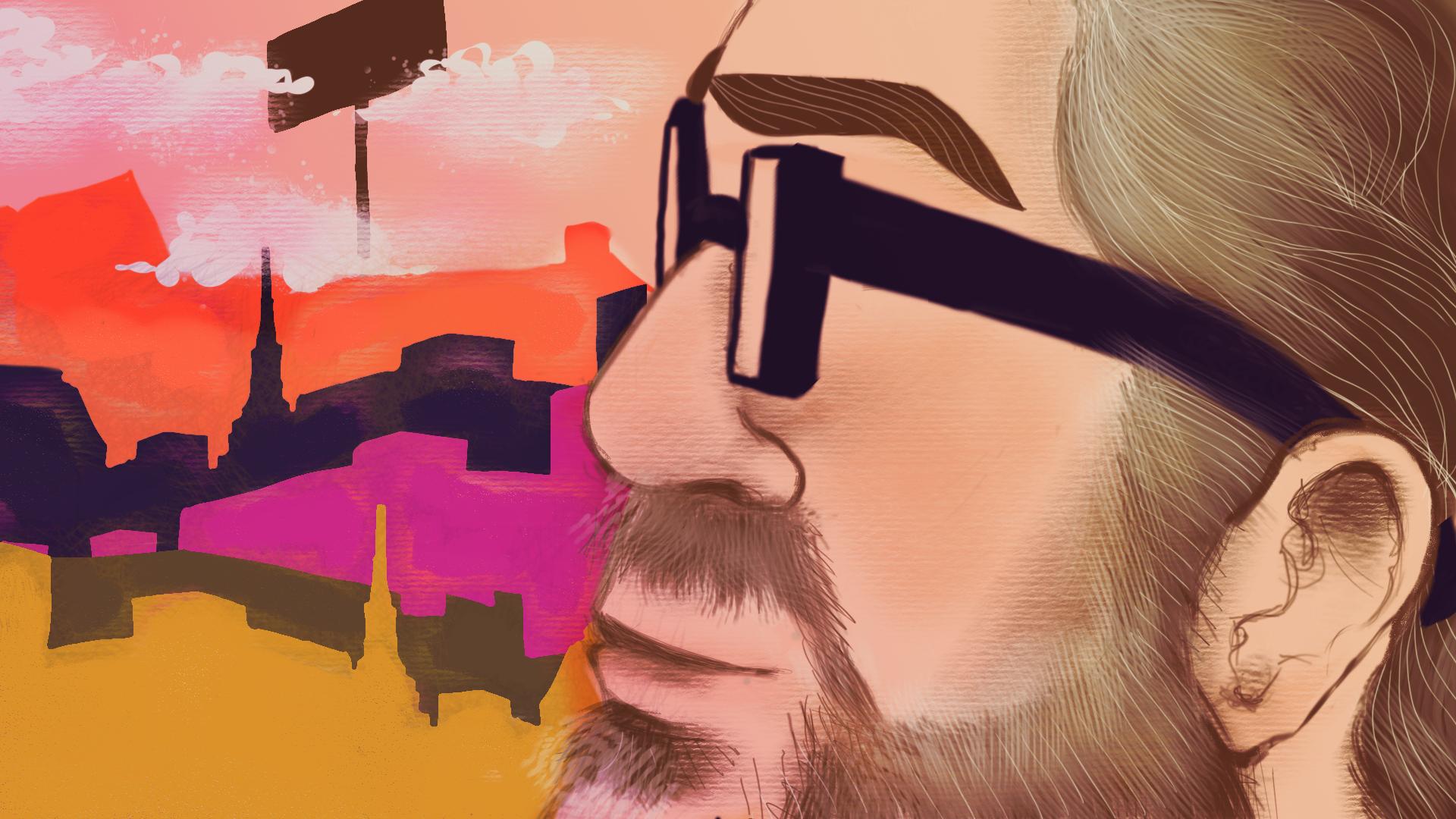 Tall bushes and vines cover the wooden privacy fence that encloses the outdoor dining area. Even when standing up close, it’s almost impossible to see through the landscaping.

It may seem exclusive, yet once inside, Lagos and his staff treat guests just like family.


Lagos settled on this style of running a restaurant after what he calls a painful yet beautiful journey. Through heavy personal and financial loss, he transformed himself and redefined his idea of the American dream.

Lagos was a lawyer and educator in Argentina who lived through the military dictatorship of the 70s and the 80s. Shortly after the political turmoil ended and a great economic depression loomed over the citizens, his only daughter was born.

Seeking a stable economic future for his family, Lagos came to the U.S. with his wife and their three-year-old daughter in 1986. His father-in-law had given them some money and suggested they use it to open an artisan furniture store in New York.

But Lagos said life had its own plans.

“I don’t have good memories [of those days] because it was terrible,” he said. “I went to put up a business in New York, and everything went wrong.”

After nine years of marriage, Lagos and his wife went through a heartbreaking and very costly divorce just a few months after they landed in New York.

He lost everything: his money, his family, his home, even his health to self-imposed expectations, focusing on nothing but hard work. He ended up sleeping in libraries, in churches, and on the street.

“A Jewish-Argentine couple who were friends of mine in New York, good people, lent me $100 so I wouldn’t sleep in the car,” Lagos said. “Told me to go get a hotel.”

Instead, he used the $100 to come to Orlando still consumed with the idea of working hard toward what he thought of at the time as the American dream: acquiring wealth. 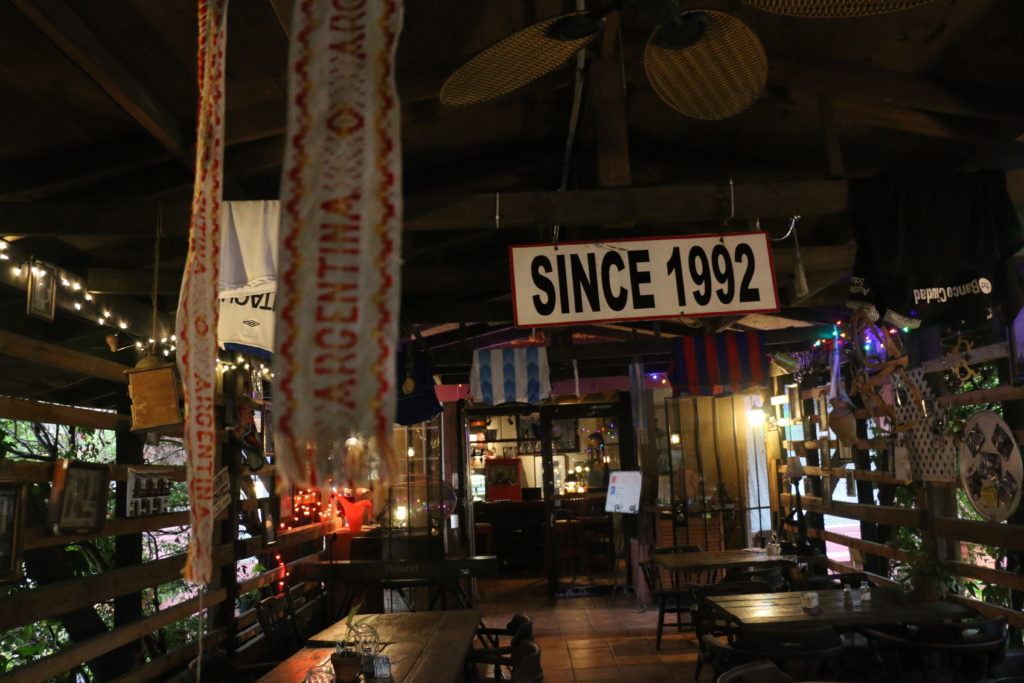 The outside dining area at Lagos’ Argentinian Steakhouse in Orlando has a private, enclosed designed. It is covered on all sides by tall bushes that block out sunlight and keep it cool and comfortable. It is decorated with Argentine regalia, personal knick knacks and photographs, as well as old news clips that cover his journey. (Photo credit: Lillian M. Hernández Caraballo)

He was offered a job as a dishwasher at what was then a very popular Italian restaurant called Vivaldi’s.

“I liked the job of dishwasher. It gives you time to be alone with your thoughts,” Lagos said. “Everyone else is busy. They leave you alone, so you get to observe how everything plays out.”

He said that all this listening and watching helped him learn enough about the restaurant business to start helping in the kitchen, then waiting tables and eventually becoming the manager.

It was then that he began dreaming again about starting his own business. His focus at the time was on churros, because he thought people would find the fried dough pastries delicious and more specifically because he noticed no one else was doing them in the area.

He bought a long, hand-operated churro machine, the kind with a conveyor belt, and placed it in his apartment where he would make them. He started by walking up to different establishments and people in town to sell them directly to new customers. 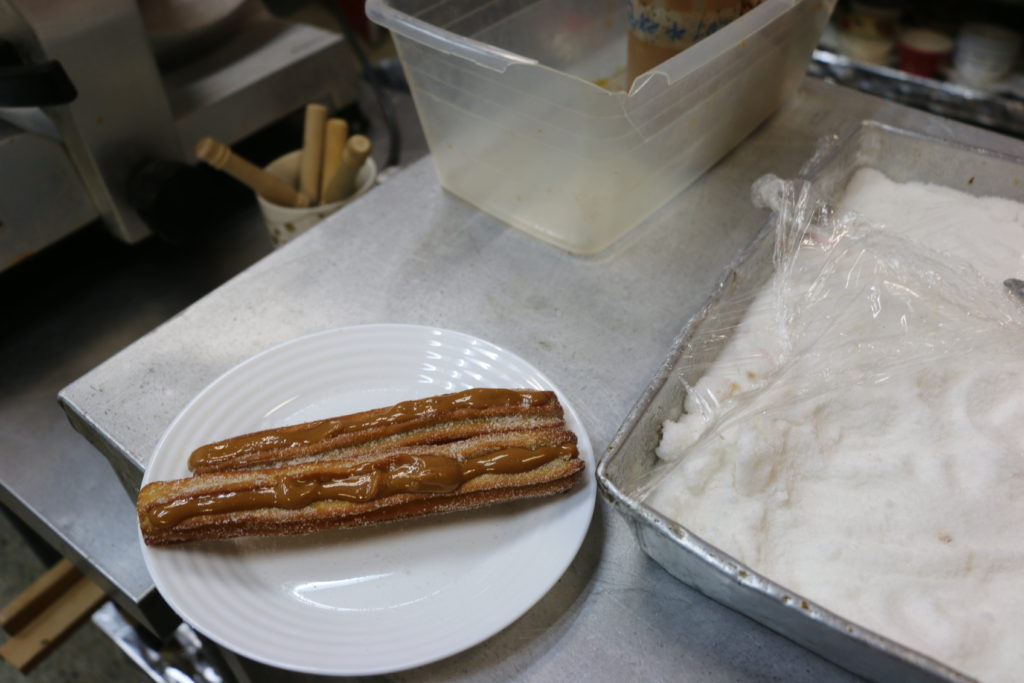 Lagos got his start in the early 90s with a churros food cart on Church Street in downtown Orlando. His spot was right next to the train station, for which he called his business Choo-Choo Churros as a play on words. (Photo credit: Lillian M. Hernández Caraballo)

Lagos was told that he was crazy to think anyone would care for Argentine food in Orlando. But his churros were such a hit that he won a contest in downtown Orlando for a spot to run his own food cart.

The space was located right by Church Street Station, an old train depot that, by the 90s, had become a bustling entertainment complex. He called his business “Choo-Choo Churros,” a nod to the trains that once stopped at that spot.

The name proved memorable and successful. During Church Street’s financial peak, Lagos would sell close to 2,000 churros a day, sometimes more. He was the only seller with authentic churros, filled with dulce de leche and chocolate sauce, as is typical in Argentina.

He eventually gathered enough money to rent a dedicated space on Bumby Avenue in Orlando, where he could make more churros faster, to help meet the high demand. He no longer needed to make his churros in his small apartment.

But life still had other plans for Lagos. 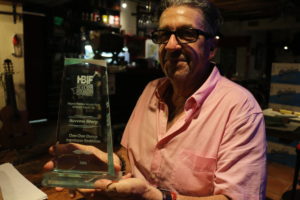 Oscar Lagos poses with his Hispanic Business Initiative Fund award. He was honored in 2004 as that year’s “Success Story” for excelling over his challenges in life and finding prosperity in his work. (Photo credit: Lillian M. Hernández Caraballo)

“Church Street went broke and, with it, so did I,” Lagos said. “I went from selling 2,000 churros a day to selling maybe one or two.”

Still determined to make it, Lagos pursued another idea: going wholesale. He had lost the food cart but he still had that space on Bumby Avenue to make the churros.

“If they won’t come to me, then I will go to them,” Lagos reasoned.

Soon, he was doing steady business all over Florida. Eventually, he started selling across states and even with big companies in other countries, including Goya. This gave Lagos the capital he needed to open his dream restaurant in 1992, which he said was the very first Argentine restaurant in Orlando. 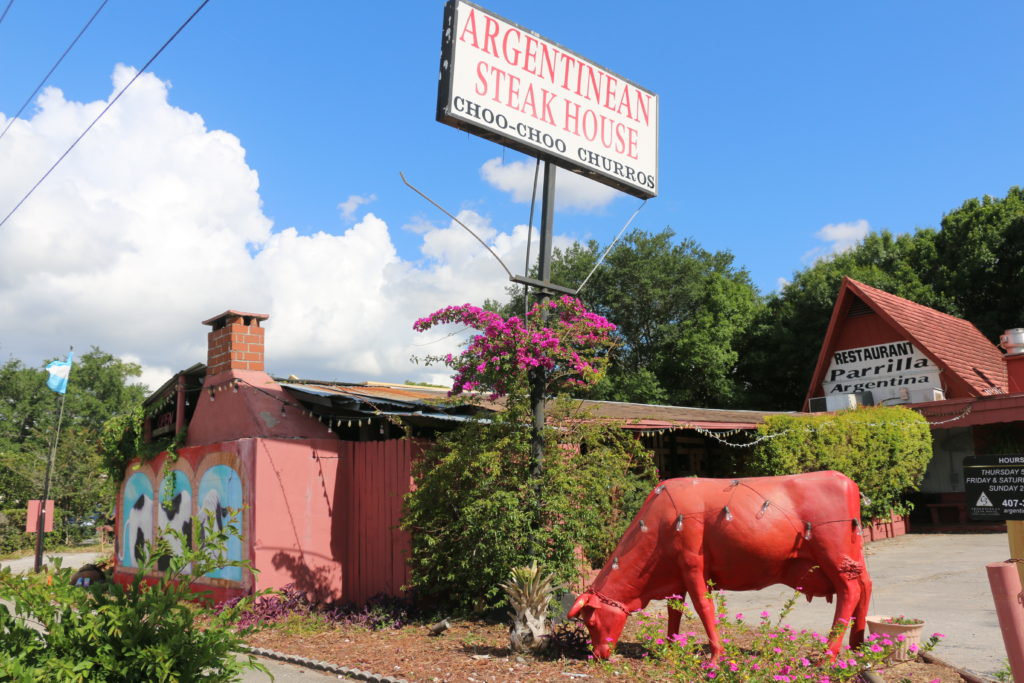 The embodiment of Oscar Lagos’ philosophy: the Argentinian Steakhouse Choo-Choo Churros in Orlando. He opens four days a week, only for dinner, and prefers reservations to properly execute his idea of treating guests like family and serving them home-cooked meals. (Photo credit: Lillian M. Hernández Caraballo)

“I opened two more restaurants; one in Tampa and another one in the Keys, too” he said. “But that did not last because my health gave out on me.”

Since moving to the U.S., Lagos had endured four divorces, cancer, and four bypass surgeries. The experiences left him wondering whether he was focusing on the wrong things. 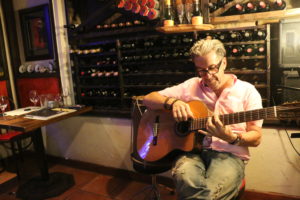 Oscar Lagos says he has been inspired by American music since he was very young, mainly rock and jazz. He plays several instruments and often invites musicians to play at this restaurant. (Photo credit: Lillian M. Hernández Caraballo)

“Life…told me to learn something I hadn’t yet,” he said. “To live with less and be happy with what you have. We don’t need credit. We don’t need riches. We just need to learn to love.”

Lagos’ Orlando restaurant now has a reputation for authentic parrilla argentina (Argentine grill mix) and showcases his famous churros on the dessert menu. Choo-Choo Churros operates four days a week, only for dinner, and primarily by reservation.

“We take care of walk-ins if they come a long way. We just won’t mass-produce,” Lagos said. “That way it’s like they’re coming to my house. When people come here I enjoy them like my friends.”

He now focuses on quality of life over quantity of money and said he is living the American dream on his own terms.

“It is not all about money,” Lagos said. “This [life] is to live with dignity. This is enough. This, to me, is freedom.”

"I work only to enjoy life now. No more swimming, only float" 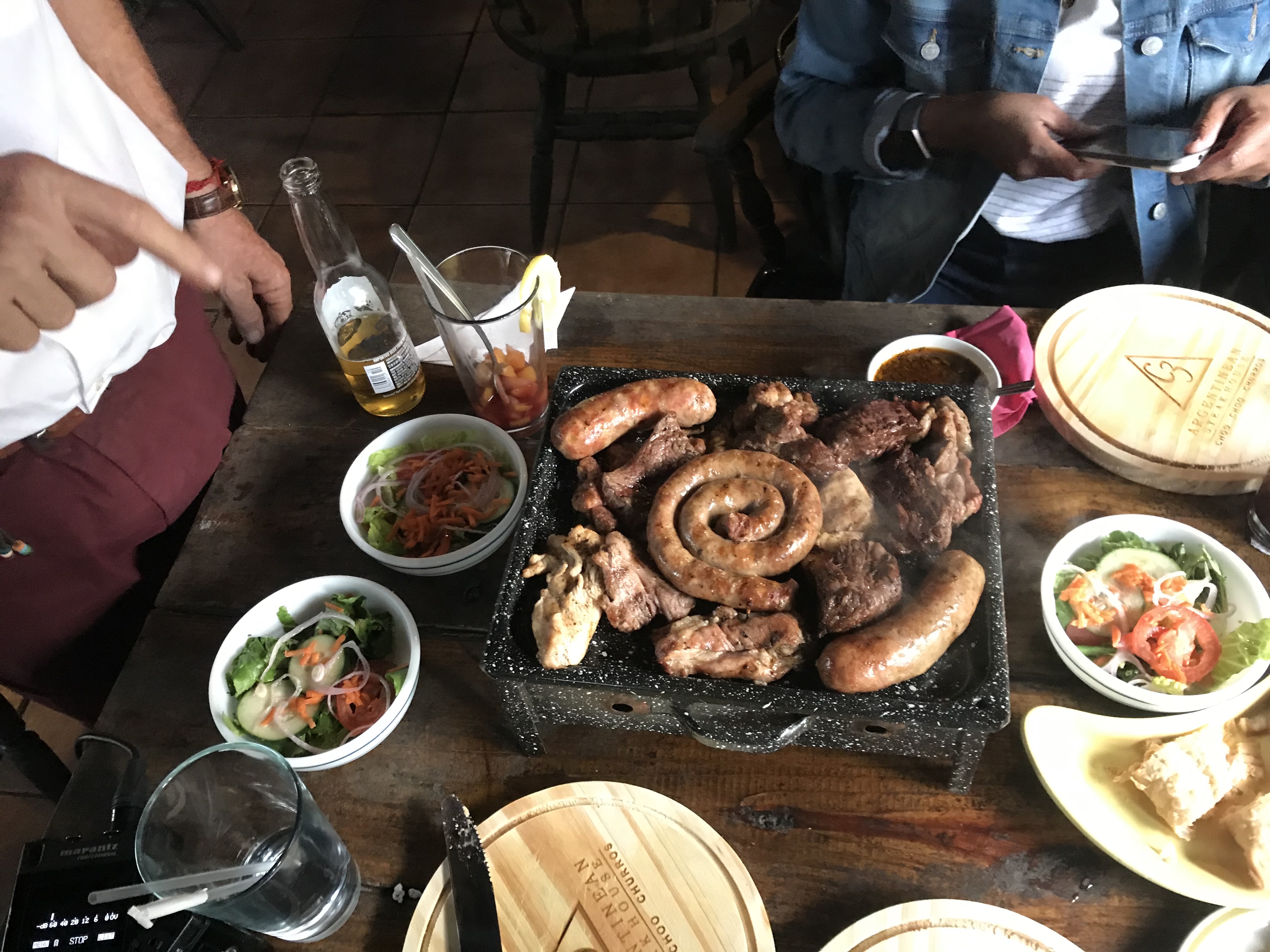 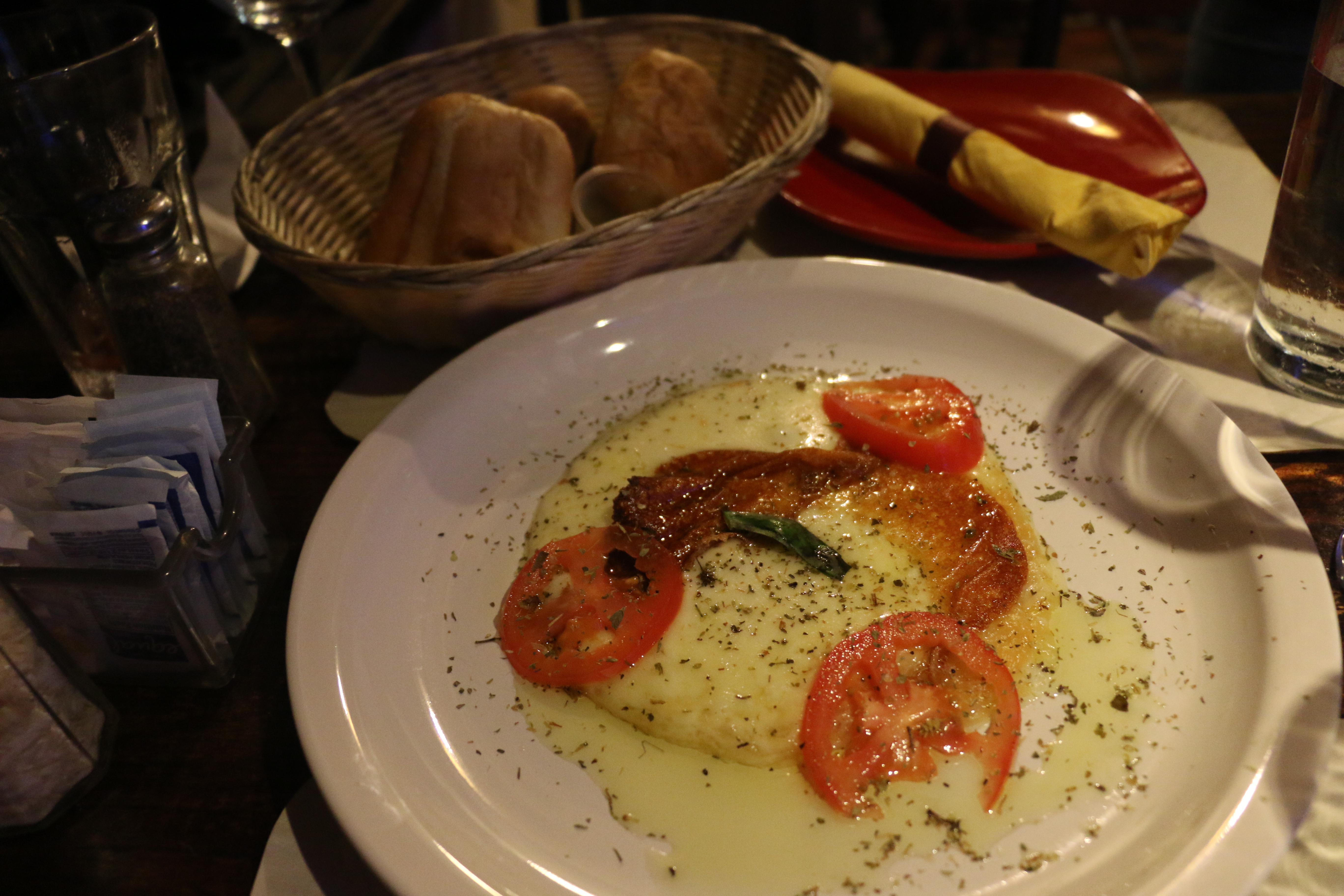 The Choo-Choo Churros Argentinian Steakhouse is known for its authentic parrilla argentina (Argentine grill mix) and steaks, served on a hot grill. Oscar Lagos make the sausages in house, and says his restaurant is different because the meat is cut at the moment it is ordered.  A popular appetizer at Lagos’ steakhouse is the provoleta, a thick slice of provolone cheese grilled and served with sliced tomato, olive oil and herbs on top. It is a typical Argentine dish served with a side of fresh bread rolls.  (Photo credit: Lillian M. Hernández Caraballo)