Reflection and thoughts about the program

Looking back at the overall week, I can definitely say that I learned quite a bit. When I originally applied for NPR’s Next Generation Radio, I knew that this program was perfect for me to challenge myself. It allowed me to acquire certain skills that are important in journalism, regarding audio, writing and social media. My process of completing the program was slightly different from what I expected, though. 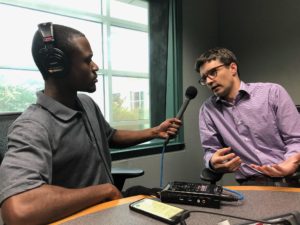 My first story pitch didn’t work out because the source didn’t respond back to my interview request. Then the second person that I actually had a scheduled interview with, declined to follow-through the morning of. It was rough. If it wasn’t for my mentors in the program, I would not have come across the particular story I ended up doing: I got to interview WMFE’s Matthew Peddie, he’s a radio host and reporter for the public radio station in Orlando.

The whole week was a learning experience. We worked on both a digital and an audio story. I learned that it takes time to properly construct stories within both these mediums. For the digital version, I wrote and rewrote multiple drafts in order to make sure I got extra information in there that didn’t fit into the audio story.

Working on the audio version was different. The story is a non-narrated piece, so I had to make sure that it was edited properly and that the content addressed the project’s theme: “first days in America and how that  influenced who they are today. It had been about four years since I last edited audio, so it was like starting all over again. I now have a better understanding of audio storytelling.

The Next Generation Radio Program will definitely force you to think critically about your story, and how to tell it through different mediums. I was able to learn from my mentor, Jessica Meszaros, and work with her to complete each task.

My favorite part of the program was seeing the final version of everything. It was an awesome feeling. A couple years from now, I can look back and be proud of the work that I did for NPR’s Next Generation Radio.